The Three Gorges  dams are built and the hydropower plants are operational, is it too late to take a cruise on this stretch of the Yangtze River?

After much debate, in June 2011, we finally embarked on a cruise that started from Wuhan, sailing upstream to Chongqing as destination. For 5 days, we were on board of the Jenna Katrina, one of the newly renovated vessels.

We first made our way by car through Wuhan to Yichang, stopping at a Chinese Garden黃鶴樓(above). On our way, we passed by  an ancient walled city 荊州古城. While going through the city, we were amused by people cooking and dining just by the side of the carriageway. What a strange sight! 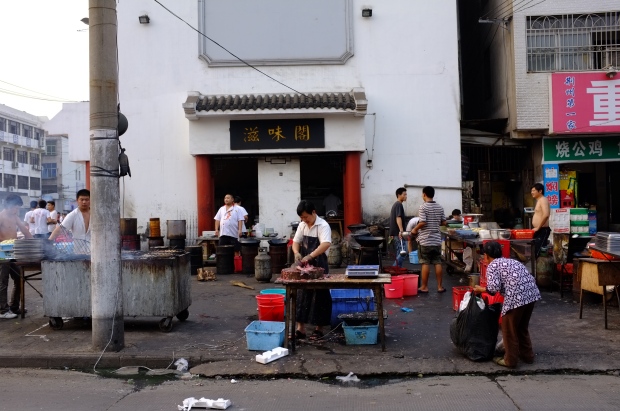 We boarded the vessel at Yichang 宜昌and were happy that each room had a balcony overlooking the river.   Sailing through the Yangtze was like passing through fjords, but after the construction of the dams, water has risen 110m above the original sea level. This made the sight less dramatic.

While on board, we came to know a friend Mr. Au. He was sort of a shutter bug, always carrying his camera with him and taking anything of interest in the whole trip. He was a well-travelled man in his 70s, energetic and sociable. We learnt that he had spent part of his life in Jamaica! For several days, we chatted about practically everything, from travels to families, etc.

Navigating the river when the sun was setting was a memorable event. For very long stretches of the waterway, all you can see were layers and layers of mountains in different shades of the same color on both sides.

The Three Gorges dam was pretty  awesome; it was indeed an engineering feat.

It was a  foggy morning when we arrived at the dam site. All we could see were some portions of the dam disappearing into infinity.

Then this was this monotonous journey going  through a series of double gated locks which successively raised vessels to the higher levels.

Once out of the locks, we sailed through further gorges and made several stops on the way. At each of the stops, we were permitted to go onshore to visit some places of interest. One of the places we went was the Gate of Death ( see Chinese characters below).

It is a Chinese belief that when death comes, we all have to pass through the Gate of Death and interrogated by the guards (see statutes on either side of the steps in the picture above) there to determine whether one is to go to hell ( with 18 levels depending on the degree of purification required). 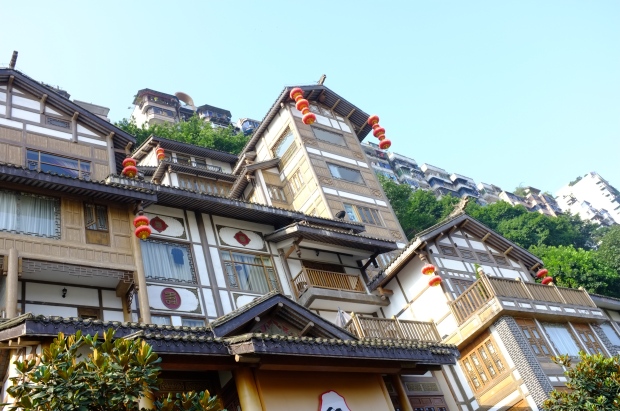 The trip finally came to an end when we reached the “hill town” of Chongqing. We said goodbye to all the people we met on the vessel and happily made our way home. While our friend Mr. Au continued his travels to Inner Mongolia and then Taiwan, meanwhile keeping in touch with us.

Mr. Au has become a good friend of our eighty years old dad who was with us on the cruise to Yangtze River. In January 2012, 7 months after we met Mr. Au, we learned with sadness that he has passed the Gate of Death. He was diagnosed to have pancreatic cancer in September (like Steve Jobs) and fought a short brave battle. This is indeed a brief but memorable friendship.