If you haven’t heard of Shirakawa-go (白川村) in Japan, then perhaps you should consider making a trip to this UNESCO world heritage site. The Shirakawa-go is located on the Shogawa River Valley in the remote mountainous region between Takayama and Kanazawa. It is  best known for its traditional farmhouses with thatched roof.

Many visitors prefer to visit in the Winter when the whole valley and the farmhouse roofs are romantically covered white with snow. For me, I rather prefer Autumn when there are lots of colors.

Arriving there, we first strolled by the river bank and enjoyed the view of the colored foliage at this time of the year. It was like a rainbow of hues and this never failed to delight us.

Then we have a close encounter of the farm houses. The steep A-frame style of the farmhouses are called “Gassho-zukuri”合掌村, some of which are more than 250 years old. The thatched roofs are supported by logs tied with ropes, without any nails, formed to a shape like Buddhist monks praying with their hands pressed together.

The photo I like best is the one below which shows a small  thatched house and paddy field; a path leading almost to it and with lots of trees of different colors at the background. This is like the first painting I did as a small boy; sheer simple and delightful. 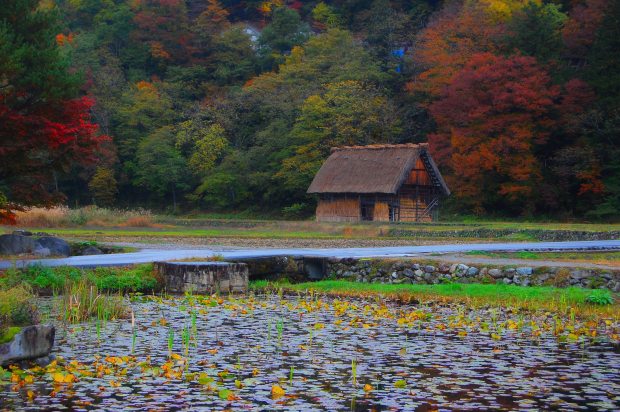 We spent the later part of the afternoon walking around the village unravelling the secrets of the Gassho-zukuri nestled in between the valleys of this  very mountainous region. Not only the houses are beautiful but also the hills, leaves and flowers at this time of the year.

The leaves are incredibly beautiful with all kind of different colors. . . . . . . Autumn Leaves was the song in my heart.

One thing that I found with Japanese Maple is that their color is not quite the same as found elsewhere.

On returning from the trip, I realized that I have missed out some good vantage points for taking good pictures. . . . . . . . . . .obviously, one could have climbed up the nearby hills and have a bird’s-eye view of the whole village. I have some regrets of not having done that;  but this gives me a good reason for going back at least for one more time!