It was a cold winter day when we arrived at WuYiShan  ( 武夷山). Up on the mountains, there was mist everywhere. We were not surprised at all by the mist as WuYi has 200 misty days in a year. Early in the morning, up on the mountains, all we could see were the mystical white mist against a dark background of mountains and trees. The sceneries we saw were impressions of  black and white. We decided to take some B&W pictures as they white offer a mystical feel and seems to accentuate the  depth of the photographs. The recent award-winning movie “The Artist” clearly demonstrates that B&W can be more expressive. We journeyed through back and white Chinese landscape paintings.

The WuYi Mountains ( 武夷山) are a mountain range located in the prefecture of Nanping, in the northern border of Fujian Province and Jiangxi Province, China. The mountains cover an area of 60 km². In 1999, Mount Wuyi entered UNESCO’s list of World Heritage Sites, both natural and cultural. It is the most outstanding biodiversity conservation zone of SouthEast China. 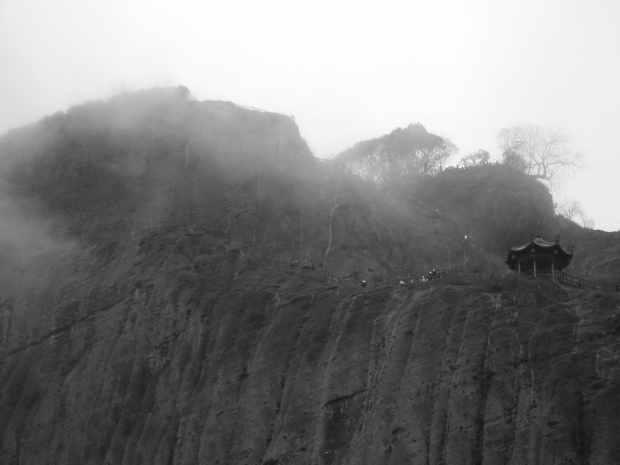 We half expected that we would have mist on the mountains but didn’t expect that the climb up the WuYiShan was that tough. Our first stop was the Tianyou Feng ( 天游峰) which is 410 meters high. It was a breathtaking experience (both literally and figuratively) as we ascended 828 steps to Tianyou Feng for a glimpse of the Nine Bend River (九曲溪) below.

There is a saying that “If you have not climbed Tian You Feng, you have not been to WuYi mountain!” So, although the climb was difficult, we finally managed to get to the top. Up on Tianyou Peak  ( literally translated as Heavenly Tour Peak) we enjoyed the panoramic view of the surrounding peaks and hills made  of red sandstone (danxia) with very steep slopes and  also the 6th bend of the Nine Bend River below.

We made our descent and reached the river bank; ready for our next thrill and challenge. 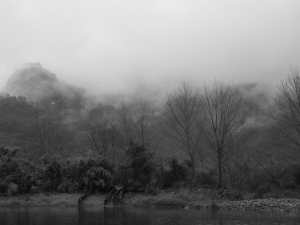 Floating down the Nine-Bend River is the most popular cruise. The raft is about two meters wide and eight meters long, it is made of eight to nine bamboo poles with six bamboo chairs affixed to the raft. 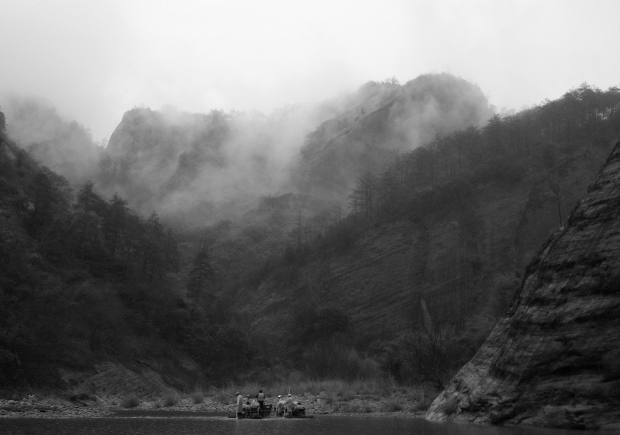 This winding river is one of the most scenic spots in Wuyishan. As tourists cruise along for the length of 10 kilometers and enjoy the stunning scenery, the rafter tells stories about the peaks and the river.

On the day we floated down the river, the weather was cold and it was raining quite heavily. The rain and wind were whipping hard on us. 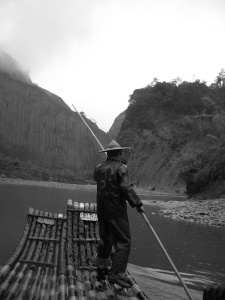 For the whole 70-minute cruise, we went shivering and could not concentrate on what the rafter was talking; only wanting the cruise to end as soon as possible. Nevertheless, the mist covering the hilltops on both sides of the river was most mystical as we glided along the eddying pools and scary rapids.

After the tiring climb and an unforgettable bamboo raft trip, it was time to leave WuYi. We made our way back to town and stepped back into a world of colors.