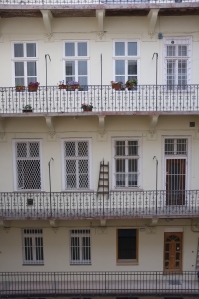 Woke up early in the morning, I was wondering what really were my impressions of Budapest. We have seen the beautiful scenery of Buda and Pest, the blue Danube, the Castles, churches and many monuments. We have also seen the other side of the city with street side sleepers and people scavenging garbage bins for food. Budapest have a glorious past, will it ever rise again? We have been to the Heroes’ Square and were impressed by the statues. Would there be modern heroes to bring the country further forward ?

While thinking about these, I opened the windows and drew the curtains of our hotel room and noted that it opened into a backyard with windows and doors. They looked pretty interesting and regular. I then realized that my impressions of Budapest are in fact composed of various interesting bits and pieces, just as the view in front of me was interestingly composed of windows, doors and ladders.

Budapest have many facets; the bits and pieces are an integral part of the city without which the city would have a lot less appeal and character.

On our last day in Budapest, we first stopped by a Catholic church and were impressed with the stained glass windows and the reflections they made off the relic on display.

Then we wandered into a shopping area and were happy to discover the many arts and crafts which were made locally. In particular, we liked this shop which displayed very well designed objects of desire: pigs and elephants. We like the pig.

Back onto the street, we came across this metallic statue with a gentleman standing at the top of an arch footbridge. Why is he so lonely? 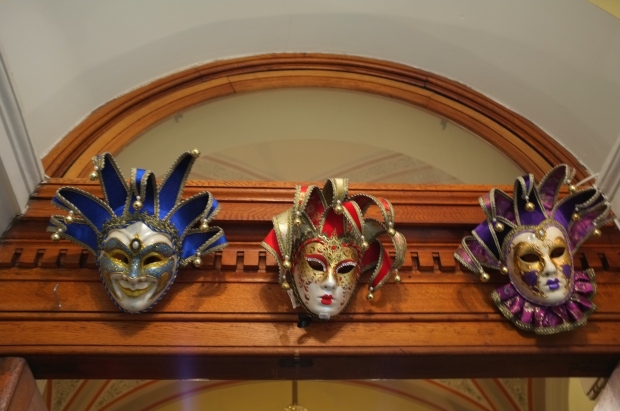 I was puzzled as to why we have masks in both the Oriental and the Western cultures. Apart for fun, are we trying to hide our facial expression so that people would not know what are our deeper feelings? I was intrigued to see these Venetian masks hanging up in the shop.

Then we wandered by the river promenade of the Danube and strolled as far as the Parliament house. We saw these shoes along the bank . Clearly, these shoes are not made for walking but are created so that we would not forget the terrors of war and the killing of the innocent people.

According to Wikipedia “The composition entitled ‘Shoes on the Danube Bank’ gives remembrance to the people shot into the Danube during the time of the Arrow Cross terror. The sculptor created sixty pairs of period-appropriate shoes out of iron. The shoes are attached to the stone embankment, and behind them lies a 40 meter long, 70 cm high stone bench. At three points are cast iron signs, with the following text in Hungarian, English, and Hebrew: “To the memory of the victims shot into the Danube by Arrow Cross militiamen in 1944–45. Erected 16 April 2005.” (Source: MTI, Saturday, April 16, 2005.)

When evening set in, we knew it was time for dinner. After a day of tiring walks, we were prepared to replenish ourselves; we found ourselves collapsed in the comfortable sofas of this almost empty restaurant.

22 thoughts on “Budapest – Bits and Pieces”