After viewing the beautiful flowers in Furano, we wandered further afield, to the rolling hills of the “Patchwork Road” where we were to view not only flowers but also some “famous” trees . We all know patchwork means sewing pieces of different materials together in a pattern. Here with flowers blooming, the scenery looked like a carpet of blossoms woven like patchwork on the rolling hills when viewed above from a distance. 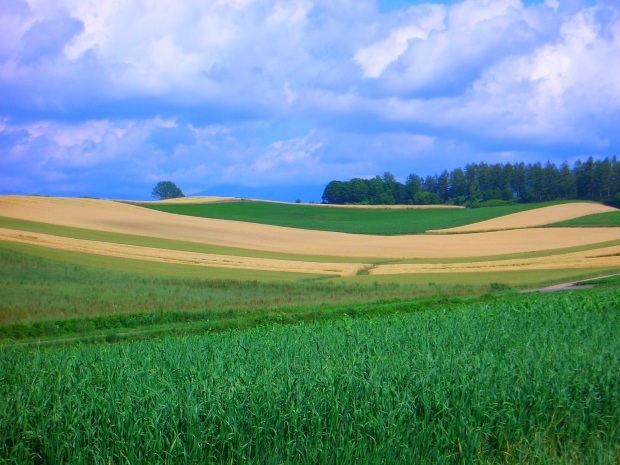 The Patchwork Road is the scenic area northwest of Biei’s town center. Patchwork Road is a misnomer, it refers to an area rather than a road. It offers  beautiful rural landscapes all year round, with beautiful colors against a  green background in the summer and  white when everything is covered under a deep layer of snow in the winter. 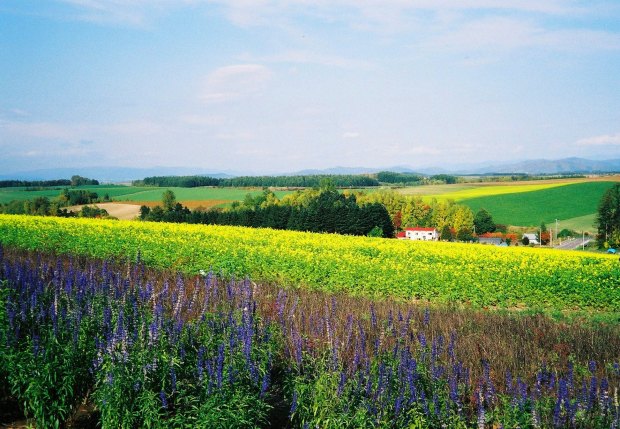 Around late June / early July you can see the beautiful potato flowers in the Biei hills. Oddly enough, the color of flowers changes depending on the types of potatoes. Potatoes originating from Ireland “danshaku” (meaning baron) have light violet flowers. Potatoes originating from England “may queen” have bold purple flowers. Potato chip potatoes “toyoshiro” we see here have beautiful white flowers.

Over the years, the area’s  immense beauty has attracted the attention of marketing people, and some trees were used in commercials or for package label designs.

Among these “famous trees” are a row of larch trees ( above and below) on the Mild Seven Hill (from a cigarette commercial), a poplar named Ken and Mary Tree (from a car commercial by Nissan in 1972) , the Seven Star Tree (which appeared on  cigarette packages). and a   group of oak trees is known as the Parents and Child Tree.

A common sight in this area also included  fields of gold.

Tracing a gentle curve of green above the hill, the Larch trees stand together and create a natural wind-break. Since its appearance in the filming of a 1978 Mild Seven commercial, this hill has come to be known as the Mild Seven Hill. 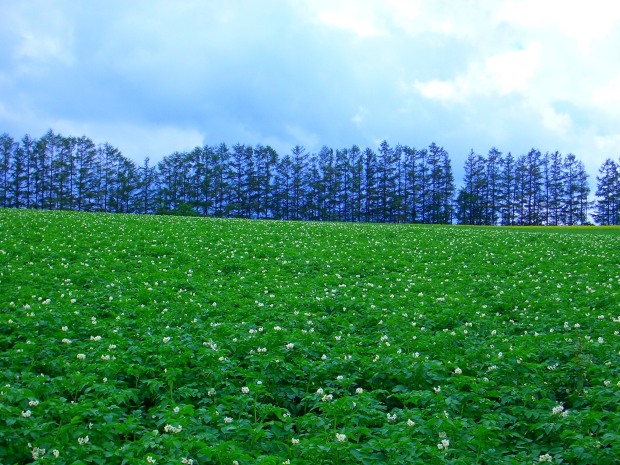 This scenic spot representative of Biei appeared in 1976 on Seven Star cigarette packages. The image of a lone oak tree standing in the middle of a wide field is now closely associated with  Hokkaido.

These trees (below) are called the Oyako no Ki, literally parent and child trees. Three oak trees (two bigger trees cuddle up the small one) are seen standing closely to one anther  giving a warm feeling of the parents and a child.

The Ken and Mary tree was popularized in an old Nissan commercial in  1972. Almost all tour books 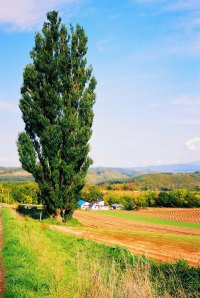 and magazines cite this as a “must see” spot in Biei. The tree itself is sitting next to a road, so today, you can see bus loads after bus loads of tourists stopping by  discharging tourists who rush out to the middle of the road  to take a quick snap shot of  the tall tree.

Surrounded by magnificent mountains of Daisetsuzan volcanic group and vast open fields,  we found ourselves wandering aimlessly in this romantic open fields. 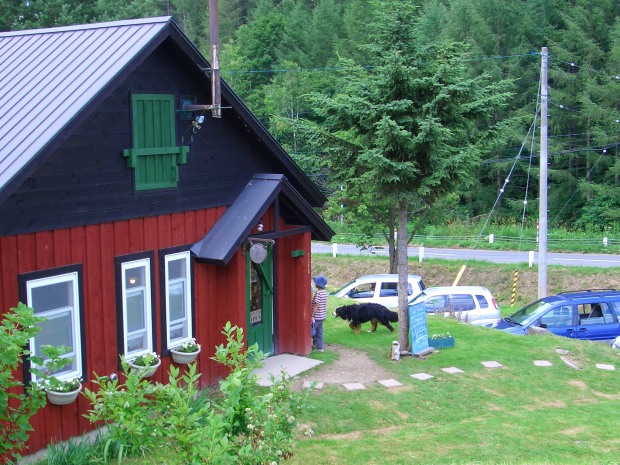 For those who are interested in the time table for blooming of flowers in Hokkaido, the local Tourism Board do publish a flower calendar showing the what flowers will bloom in the summer months: