I have a good look at the Dubrovnik old city using Google Earth. It gives a bird’s eye view of the city and I can zoom onto any part of it, demanding a street view or some detail information about the places of interest. I happily  re-lived my journey using this wonderful tool.

While I am happy with what I find; I also notice that there are not much of vegetation or large open spaces within the old town. Even from a mile up above the city, the whole city seems to be orange color- from the orange colored roofs jam packed together. My trip up the hill Srjd behind the city also confirmed this (see my previous post of Dubrovnik – From a Distance).  I guess that in the past many people wanted protection within the four sided castle walls and fortifications of Dubrovnik. Most open spaces are ultimately utilized for housing people within the confines of the wall. The city finally could not longer grow organically within the confines of the walls ; the city was left with that compressed feel as common for other former capitals such as Toledo, Spain.

The place is built up and gives one the impression of  being “hard”.   As Jan Morris in her “The Venetian Empire” describes  it as . . . .  “A hard city it remains too, to my mind, when you cross the bay and land upon its quay, beneath its high fortifications. It is very beautiful but hard. It lacks the yield or leniency of Venice. Built of a glittering and impermeable marble, enclosed within superb city walls, tilted slightly with the lie of the land and corrugated everywhere with battlements – tightly packed there within itself it has acquired non of the give-and-take of great age, but seems in a way a perfectly modern place, dogmatically planned and didactically displayed to visitors, like a model town in a trade fair.” Indeed, it is a city in which residents have to live under the eyes of tourists all year round.

Here is that street today called Stradun. Once the left side was the edge of the mainland and the right was an island,  separated by a waterway. In the Roman days, they were developed into two towns, the one on the right of Stradun was known as Ragusa and the left the Slavic Dubrovnik.  An extraordinary feat of 12th century civil engineering filled in the water channel and left space for the long Stradun and the wide expanse in front of the Rector’s palace. This is the only wide street in the ancient city where every tourist have strolled admiring at the historical buildings and churches.

Nearby is the Big Onofrio Fountain.  It’s a 16-sided water fountain and is considered a masterpiece of engineering for the early 1400’s. Water fills the basin that surrounds this domed structure through spouts at the center of the decorated emblems. The water that serves it is 20 kilometers away.

While walking on the high walls, we found ourself walking  close to residential buildings.

Some of the houses were destroyed in the civil war of the 1990s and were left there untouched.

Sometimes we are viewing the backyard of people’s houses. 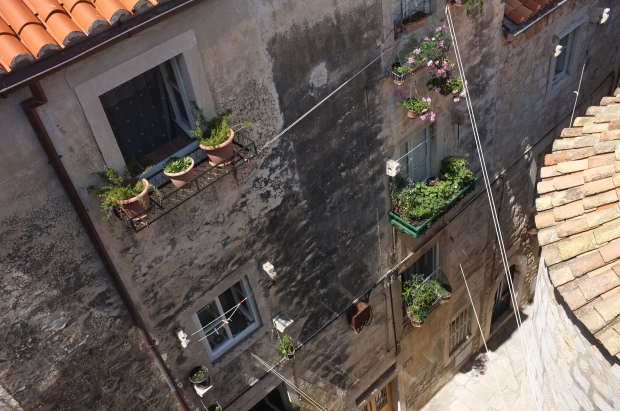 The sun is our best device for drying up clothes. In our several days here, we never fall short of finding examples where clothes and bed sheets were hung from the windows. 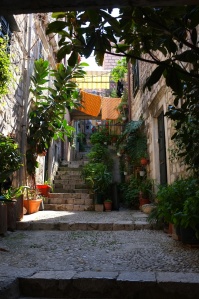 Although the old town is densely built up, it still has a lot of charms and beauty and the views from the Dubrovnik seawalls were just breathtaking.
In our several days in Dubrovnik,  it was hot and the temperatures were almost up to 30 degrees. We passed by this roadside cafe which sold drinks and fruits and decided to take a rest here. The vintage radio reminded us that we were back in time. . . . . . . . . . . .