A couple of blogging friends asked where I have taken the motorway bridge photo showing strong vertical supports and arch in Switzerland for the first foto challenge. 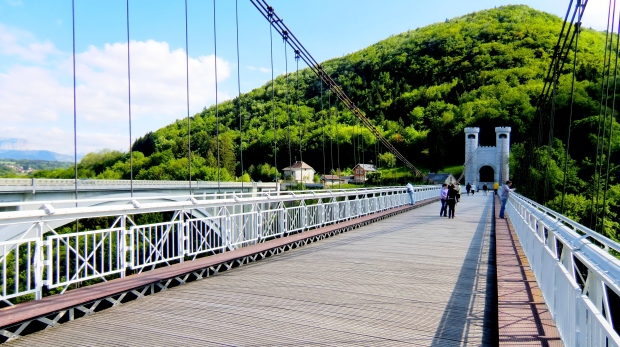 The picture was taken while we were walking across a parallel footbridge which crosses the same wooded valley.  The footbridge is fairly wide with twin masonry towers at the ends. It was sort of an old style suspension bridge with catenary cables stretching between the towers from one end to the other. Strung from the main cables are vertical cables which in turn support the suspended walkway. The picture also shows on the left the upper part of the motorway bridge and some Swiss cottages at the far end. Like other tourists on the footbridge, I was happy capturing some images of the deep valley and the motorway bridge.

The vertical cables appear as a series of vertical lines flanking the walkway. Perhaps, this is better shown on the lower picture. Indeed, both pictures show vertical Lines which are the subject of this photo challenge, although I must admit they are not as impressive as the picture I submitted in my earlier foto challenge.

Back to Lines. . . . . . .  what are they doing here? They are lines in action, transmitting the weight of the footbridge walkway taking the shortest straight paths back to the towers through the cables.  What a clever solution expressed in an artistic form!