Buildings wrapped up with photos and paintings?

The following in italics is extracted from Women Wear.

HONG KONG — One of this city’s first-ever public art installations has been unveiled, courtesy of Louis Vuitton and artist Richard Prince, who has wrapped the Hong Kong Museum of Art with enlarged replicas of pulp-fiction novel covers.
The installation, which takes its theme from Prince’s “After Dark” series, heralded a significant exhibition of paintings, photographs and video installations collectively called “Louis Vuitton: A Passion for Creation” that was displayed inside the Museum of Art. 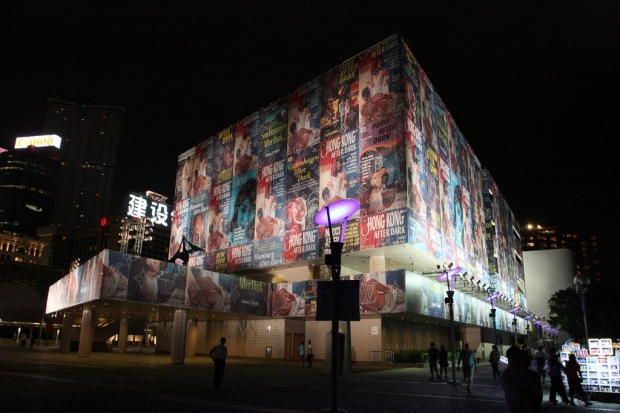 Located along the Tsim Sha Tsui promenade, the Museum of Art is one of Victoria Harbour’s most recognizable landmarks. Prince has covered the entire exterior with printed fabrics featuring bright colors and animated graphics. Each panel illustrates after-midnight stories in different cities around the world, with every other panel representing Hong Kong After Dark. The images are created using “rephotography,” a process Prince described as “resemblance more than reproduction. A rephotograph is essentially an appropriation of what’s already real about an existing image and an attempt to add on or additionalize this reality onto something more real — a virtuoso reality.”

Photos are from my friend CP Chan.