This is my other photo showing the moon gate to a Chinese garden.

As with all moon gates, it is circular and serves as an entrance to this ” Ten Thousand Spring” garden.

We were on our way to the WuYiShan ( Mountain) and dropped by this delightful garden.

I must say, this is not my best picture for Moon Gates. The best one I have taken was from the gardens of SuZhou. However, it is not in an electronic form and difficult to be scanned.

It is difficult to get away from circles.

Even as I type up this post, there are several objects on my table that are circles.

As a kid, I learn that a circle is a collection of points equidistant from the center.

As I get older, I understand that a circle can be regarded as an N-sided polygon, with N approaching to infinity.

Here are some examples of circles found in Inner Mongolia.

The first one is the ceiling inside a Mongolian yurt where all supporting members come together.

The other two photos show the exterior of the yurts.

So circles are everywhere!

This week’s photo challenge is Circle.

The circular form is a common architectural expression in the bridge design of China.

Many of the masonry bridges have circular openings. Structurally, they rely on the arching action in the masonry.

The first two photos were taken in FengHuang city ( or the Phoenix City ) of China.This bridge has three circular openings. The second picture shows a single opening in more detail.

The photo of the last bridge was taken in West Lake, HangZhou of China.

It is a graceful looking arch bridge, again with three spans.

When viewed with the reflection, complete circles are formed.

This week’s DP theme for the Photo Challenge is Circle.

Not quite sure what to submit.

The photo was taken in the West Lake, Hangzhou, China.

It shows a circular moon gate which is an important element in the architecture for Chinese courtyard or garden.

It signifies an entrance to the courtyard of the rich.

This may not be the best picture in my archive, I will need to go through it to see if there is a better picture.

Travel theme: Circles is this week’s theme in “Where’s my backpack?”

A circle is a reflection of eternity. It has no beginning and it has no end. 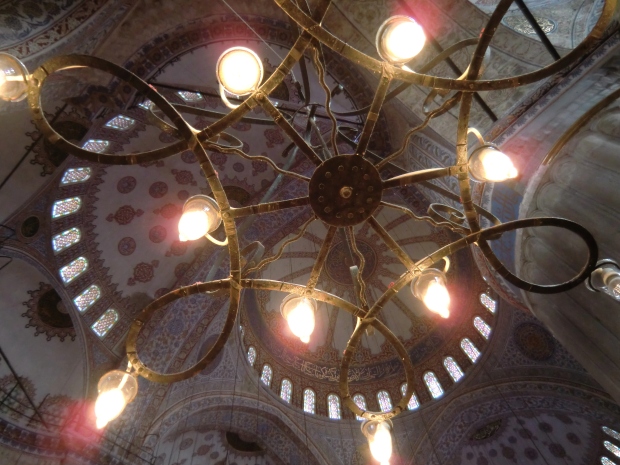 I was fascinated by the many circles inside the Blue Mosque, Turkey. Entering the Blue Mosque in Istanbul I was surrounded by an array of circles. Built in the 17th century, it has one of the world’s largest dome of 27.5 meters diameter, in addition to four smaller domes  and 30 even smaller  domes.

The huge dome hover above me, with suspended chandeliers that follow their shape only a few meters from the ground.   The endless lamps, hanging on their endless chains and hovering in great circles above my head, are miracles in their own right.

After seeing all these domes, arches, circle of lights in the Blue Mosque, I must admit I still do not have the faintest idea of what Einstein meant by the fourth dimension. I only knew that I have stepped back in time. . . . .  I have been thrown into a space where  circles and light predominate and was awed by them.