A boat trip has taken us to the north-eastern corner of Hong Kong out on a lonely island known as Jie O.

This is a less visited island.

There stood a temple for the goddess of the sea.

The doors were most interesting, with the black and white door guards above a pair of brass lions as handles.

Was it the leaves or the doors that catch your eyes?

To be honest, I was more interested in the leaves than in the doors.

But together, they make a good picture.

The picture was taken in Sapporo, Hokkaido on my first visit, some years ago.

On our way back from Inner Mongolia, we passed through Datong and visited the Hanging Temple ( see my previous post).

This is a door I captured at the Hanging Temple.

I was a bit puzzled as many old doors in China were of timber construction.

s door is in metal and has a very peculiar design.

Something I still don’t understand even now!

Claudio Magris described Szentendre as the Montmartre of the Danube; we were eager to find out more about it.

After travelling for about 40 minutes from Budapest, we finally arrived Szentendre (Saint Andrew). Stepping out of the car, the colors of this quaint little town immediately caught our eyes. The buildings of sharp yellow seemed to be the predominant color, followed by crimson and green painted on houses and shops.

The colors looked vibrant and the sunny day has accentuated these colors which are symbolic of the town. The modern town of Szentendre was founded by Serbian immigrants in the seventeenth century, which is why it bears more resemblance to southern European towns than Hungarian ones. The most pleasant way to spend the afternoon is perhaps to get lost wandering the quieter and narrow streets while admiring the various architectural styles – Baroque and Rococo – along with the beautiful Orthodox churches. Is it a strange phenomenon for tourists to avoid tourists ? I guess not at all, every tourist has a comfort zone, wanting to enjoy a place without being disturbed by others. 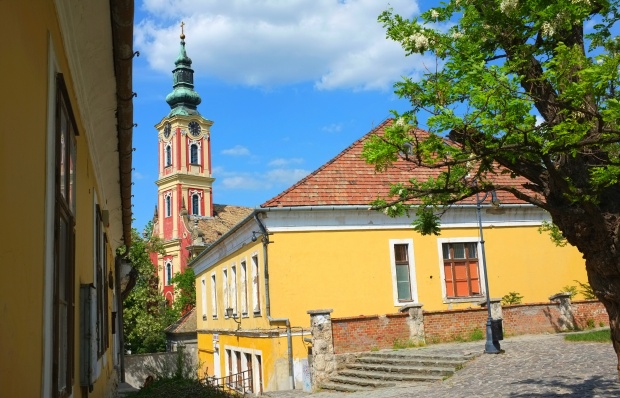 We slipped through the gates of this church which seemed very quiet from the outside. Like many other churches, it  has a simple but yet beautiful door  possibly of Serbian architecture.

Entering into the chapel, I was astounded by the altar and quickly took a photo, only to be warned that photography was forbidden. 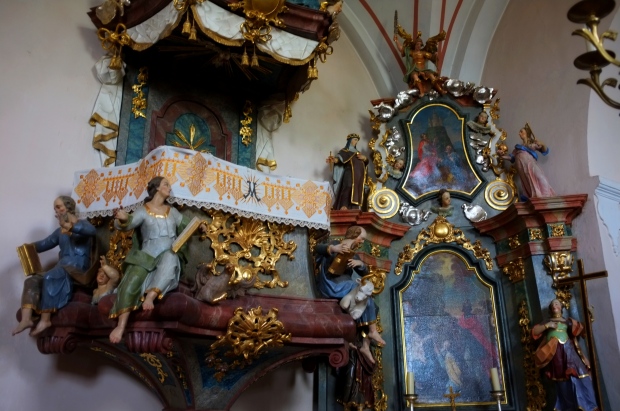 We wandered through narrow alleys and little lanes between buildings. Every turn of a corner revealed new sights.

Known as the Artists’ Village, many artists have flocked to Szentendre. It has been the home of many generations of Hungarian artists since early 20th century.  This colorful artist’s settlement has preserved its medieval history with  ancient buildings, cobblestone streets, numerous street vendors and musicians  which help to give a unique character to this small town.

We wandered around, went to the Marcipan Museum, saw a full size statute of Michael Jackson in marcipan. Then there was more window shopping; many of the shop windows were artistic and attractive.

The streets and squares were full of people. Szentendre is touristy (this is the only drawback of the place); nevertheless we were delighted by the charms it possesses.

After a half day tour, we were scheduled to cruise back to Budapest along the Danube on a ferry. Szentendre turned out to be something which is quite different from Budapest. Afterall, Hungary is not just about Budapest, surely there are a lot more places which we haven’t seen. We were to leave Budapest the next morning. We couldn’t help thinking . . . . .  . . . another trip to Budapest?