I have posted a photo of the Bell Tower of Xian.

Also built in the Ming Dynasty is the Drum Tower of Xian. 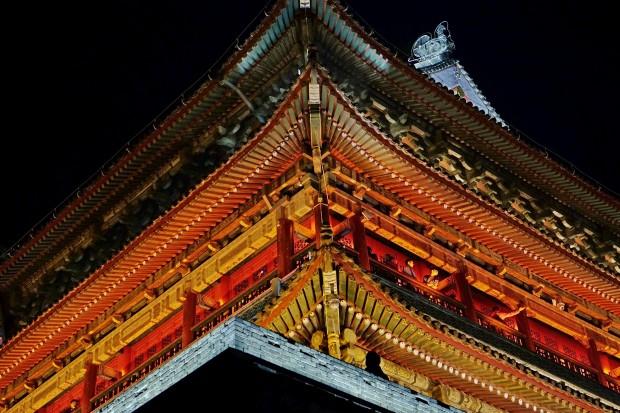 The architecture is quite similar, but this building hosts the drums.

For this post, I am showing the corner of the roof.

The roof looks exceptionally beautiful when lit up at night time.

Nanchang is where we flew in and commenced our journey to Sanqing Shan.

After dinner, we went down to the edge of the River Gan.

The rain has just stopped and we had a very good view of the cityscape on the other side of the river.

This is the older part of the city; the buildings were beautifully lit.

In the middle of the first picture, we can see an old styled Chinese building which is one of the most famous old buildings of China – The Pavilion of Prince Teng.

Nanchang (南昌) is the capital of Jiangxi Province in southeastern China As of 2010, a population of 5,042,566 live in the prefecture, in which 4,171,926 live in the built-up area made up of six urban districts in addition to urbanized counties of Nanchang and Xinjian. Located in the north-central part of the province, it is bounded on the west by the Jiuling Mountains, and on the east by Poyang Lake. Because of its strategic location connecting the prosperous Eat and South China, it has become a major railway hub in Southern China in recent decades.

As the Nanchang Uprising in 1927 was distinctively recognized by the ruling Communist Party as “firing the first gunshot against the evil Nationalists”, the current regime has therefore named the city since 1949 “the City of Heroes”, “the place where the People’s Liberation Army was born”, and the most widely known “place where the military banner of the People’s Liberation Army was first raised”.

This is the best Facebook site ( Hong Kong is Beautiful) that I have come across showing beautiful views of Hong Kong.

As an example of the photos on the site, here is a picture of the tall buildings with Victoria Harbor as the backdrop.

The view of Hong Kong is already beautiful during daytime, it is more fascinating during nighttime.

If you are interested you may want to visit the site at:

Actually, I seldom go to the harbor during nighttime.

The harbor at Hvar Island, Croatia was so beautiful that I decided to stroll down to the harbor front even though it was quite late in the night.

Boats just bobbing up and down in the relatively calm waters of the harbor, while the nearby lights cast colorful reflections in the water.

The sight was so beautiful that I hated to leave the harbor area to return to my hotel that night!

The Victoria Harbor, Hong Kong by night is just magical. 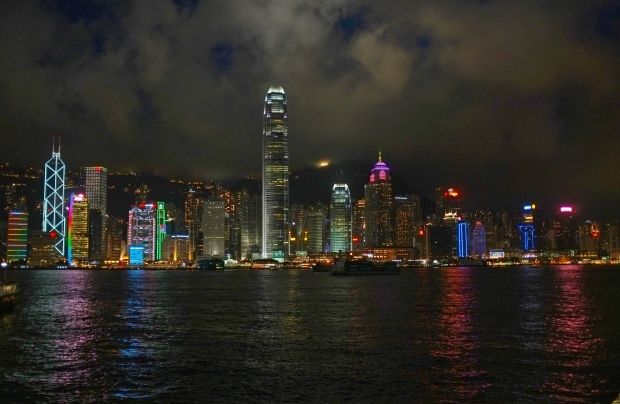 It’s lights everywhere and the reflection is twinkling.

The best harbor view I have seen of all the places that I have been.

My mind was filled with images of giant ancient columns, ancient Egyptian inscriptions, colossal statutes and mummies during my travels in Egypt over 13 years ago.

The night views at Luxor were fantastical too.

We gathered at this square overlooking the many giant columns in front of us. 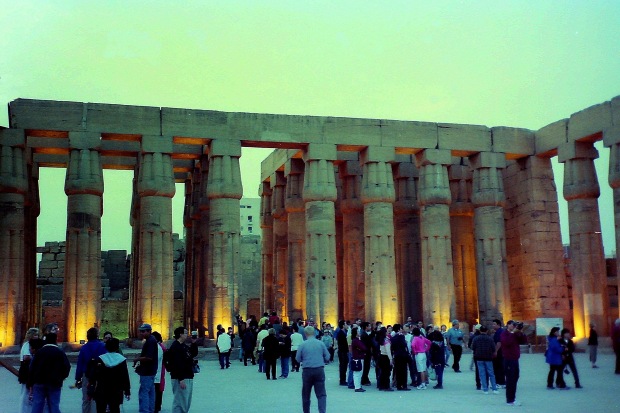 Night has just set in and the lights for illuminating the columns were just switched on.

Nobody in the square seem like leaving, they were all taken in awe with the sight of columns in front.

I thought it was a good moment to take this photo.

I continued to stay on until the place was completely dark.

Giant columns have always interested me, here is another image showing light illuminated columns which have dwarfed those passing by.

These images were taken hand held with film cameras and were scanned a year ago.