Brighton reminded me of something out of a movie from the 50s. The pebbly beach there had the feel of another era.

I was posted to our London office in 1985. After almost a year without seeing the sea, I  longed to visit Brighton which was known as “London by the Sea”.

Since Victorian days, the beach was claimed to have therapeutic value and people flocked to it; the blue sky with the soft soothing murmurs of waves can cleanse your mind and even heal your soul.

Thanks to modern technology  which allows me to scan my slides taken in 1985. More than that, I am also able to convert my slides to sepia which do instill a nostalgic feel. 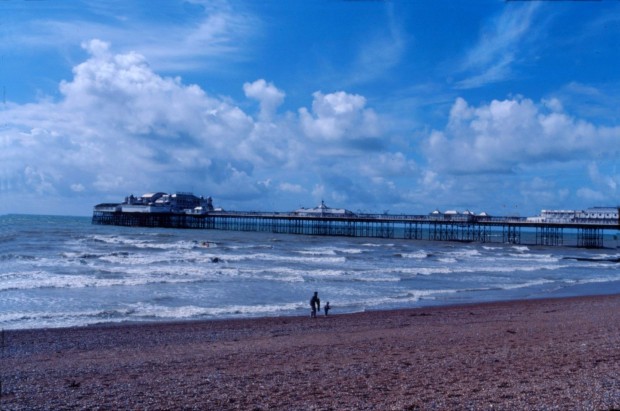 I was at the beach at the best of time. The sun was out, there were some white clouds hanging low in the blue sky. To make the picture even more surreal, the beach was almost deserted and, alone on the beach, a father was playing with  his little son with the Brighton Pier in the background and the waves kept crashing in.

Coming from a geography with many sandy subtropical beaches covered with fine white sand, it was rather difficult to reconciliate the British notion of dark pebbly beaches. Do you actually call this a beach?

Brighton Beach looks a lot different now, it is a lot more busy, noisy, full of funky cafes and restaurants. The Brighton Pier has also deteriorated and the West Pier was burnt down and disappeared. If you ask me, I rather prefer the Brighton as it was in 1985, or perhaps, Brighton in the Victorian ages.

I walked all the way out to the very end of the Brighton Pier while enjoying the fresh air and panoramic view of the harbour. I then walked past the marina and on the pebbles and shingles along the beach at the foothills of the white cliffs of Brighton. Though not as astounding as the White Cliffs of Dover, they looked awesome too.

After a  day on  the beach, I was tired, happy and less homesick; although, I must say, east or west, the beaches at home are the best!