We have a wonderful time on Hvar island, Croatia, lazing around and doing things at a slow pace which we wouldn’t have time to  do  in a fast pace world. One of the things we did was to window shop and take pictures of reflections off the windows.

It came as a surprise to me when the pictures came out. The reflection of the yachts and the Hvar harbor was a lot clearer and brighter than the window displays.

As an amateur photographer, I was thrilled by the result of the first photo and started to take more photos of shop windows and reflections. I knew I was just amusing myself on this island which was timeless .

Another picture which came to mind on reflections is a photo taken in the early hours in the court yard of a hotel in Bangkok, Thailand. The white solitary statute standing in a pond with the lotus leaves surrounding it connote a certain sense of Zen and internal reflection.

Don’t let the next picture fool you. This last picture shows the mirror like lake of JiuZhaiGou, China. The picture has been rotated 180 degrees so that the lake is in the upper half of the picture, the hills in the lower part, with the tree in the foreground reaching upwards instead of actually dripping down!!!!.

Our days in West Lake, China were spent strolling around the lake, admiring at the beauty of the scenery and looking at reflections in the calm lake waters which brought so much peace to our hearts.

It was November, the sky was grey and this imparted a blue hue in the water. The reflections of the trees in water instilled a range of moods which sometime seemed even poetic. 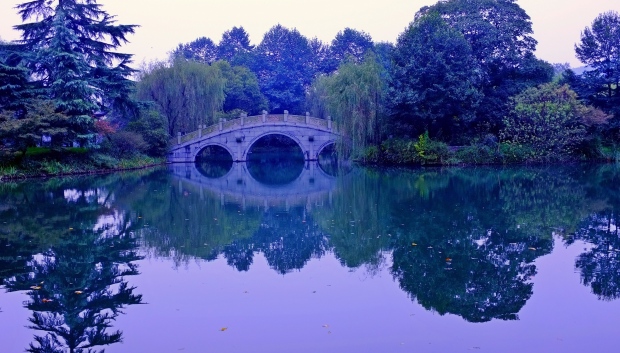 The love of bridges took us to this part of the lake. The arch bridge looked balanced and aesthetically pleasing. It looked so calm sitting on the water, casting a perfect image.

There were many willows along the banks of the lake. The reflections from the lake seemed to show even the smallest leaves. 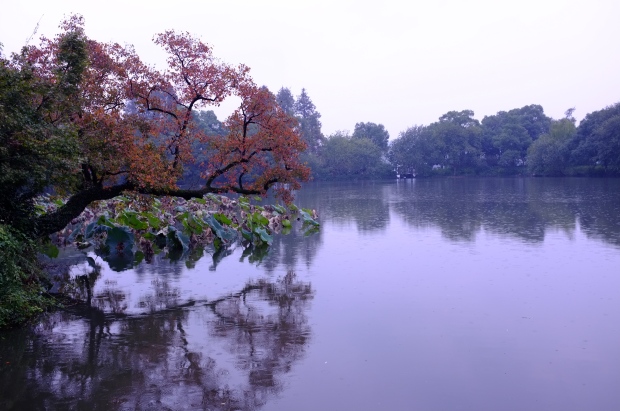 There is a place where reflections are  a common place. A few thousand metres up from sea level where there are lots of lakes, where mountains are green and water is clear and placid, you can find reflections almost everywhere.

This is up in the mountains of JiuZhiGou, China where lake water has a high concentration of calcium carbonate and mountains rise steeply from the lakes reflecting in the water. The water surface behaves like a mirror ( in fact one of the lakes is known as the mirror lake because of its silvery surface).

The tranquil and picturesque scenes in JiuZhaiGou helps one to transition from the external environment to the inner self.