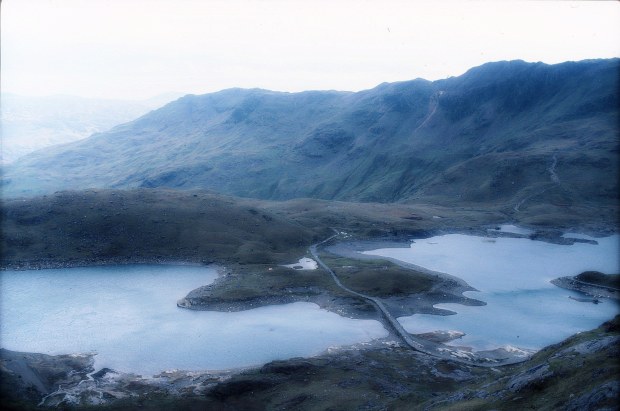 I stayed at a beach side hotel in Harlech, Wales.

Woke up early in the morning and decided to go down to the beach.

The beach was nothing I have seen in the past. It has some sand dunes piled up quite high parallel to the beach.

I climbed over the dunes; in my climb, I noticed some rabbits jotting about from their hiding places.

When I got over the dunes, my eyes were met with this magnificent sight.

Jesus light from the sky above and lines of waves coming in from the sea.

I was bewildered and took this photo.

We have the coldest February since 1996. Where I live, the temperature was down to 6 degrees Celsius this morning. You may say that this is already high by many standards. But mind you, I am living in the subtropics!

It is rainy and gloomy  too. This reminds me again of my trip up Snowdonia in 1985.

From a high altitude, I had a good glimpse of Llyn Llydaw – one of Snowdonia’s deepest lake.

The following is lifted from Wikipedia which gives a detailed description of the lake:

Llyn Llydaw – 1,430 feet (440 m) high, 110 acres (45 ha) – lies in Cwm Dyli, Snowdon’s eastern cwm, and is one of Snowdonia’s deepest lakes, at up to 190 ft (58 m) deep. Various explanations of its name have been put forward, including lludw (“ash”), from ashen deposits along the shore, to Llydaw (“Brittany”). It contains evidence of a crannog settlement, and was the location of a 10-by-2-foot (3 m × 0.6 m) dugout canoe described in the Cambrian Journal in 1862. The lake is significantly coloured by washings from the copper mines nearby, and is used by the Cwm Dyli hydroelectric power station, which opened in 1906. The lake is crossed by a causeway, built in 1853 and raised in the 20th century to prevent the causeway from flooding frequently.

The most prominent feature on this image is the causeway – a causeway which I crossed when we descended the mountain.

This looks more like a geological picture for teaching about boulders or glazier erosion.

I have never thought of climbing the Snowdonia mountain in Wales, but on that rainy day in 1985, I did.

The picture was taken on the road when we were approaching the mountain site by car. 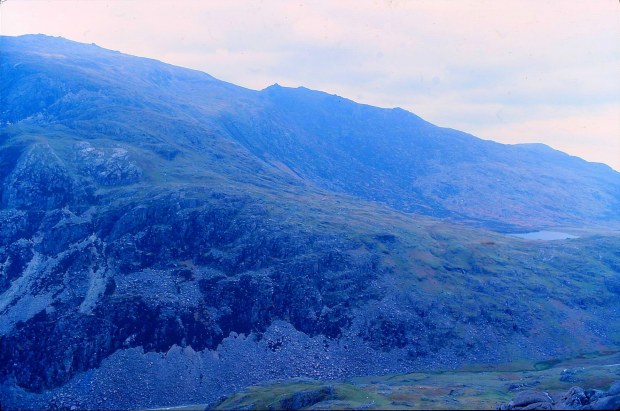 It was early Spring when we made our way up Snowdonia. Rain fell as we were laboring our way up the wet, narrow and steep mountain tracks.

After climbing halfway, my shoes were soaked with water and my feet were cold. Parts of the skin on my feet started to peel off.

The bad weather meant that I did not have many good pictures.

This photo brings back memories of an almost forgotten hiking.